In observance of Veterans Day, I’d like to share with you a very special project that is dear to my heart.

My husband’s maternal grandfather, Earl Brown, passed away this past summer.  He left behind a loving wife, seven adult children, and countless grandchildren and great-grandchildren.

My husband, and his siblings and cousins, referred to him as simply ‘Pop’.  We miss him dearly, as he was truly an amazing human being.  His service to our country, in both World War II and the Korean War, was just one aspect of the man we knew as Pop.

After Pop’s death, my husband’s grandmother made preparations to move into a retirement community and the massive job of cleaning out a home that housed treasures from over 60 years of marriage began.

During one of the many days of purging and cleaning, my husband stumbled upon a small, checkbook box.  The assumption was that it was full of unused checks, but when he opened the box, a sea of glimmering pins and medals shone before him.  Pop was not just a veteran, but an active and passionate member of his local American Legion.  Within this small check box held years of accolades and memories compiled by Pop.  Pins and medals that only scratched the surface of his contributions to our country.  My husband, knowing how important these items must be, decided to bring the box home.  After all, he was told by the elders in the family that the garage needed to be cleaned out, as grandmom wasn’t taking any of it with her.

That evening at our dinner table, my husband and I poured over the countless treasures that were barely contained in the small box.  We knew of Pop’s service, but holding the pins and medals in our hands gave us more clarity into his sacrifice.  We knew they deserved a more dignified place than a discarded check box.  It was that night that we knew we wanted to display Pop’s treasures to honor his memory and to also show respect for his service.

Upon a very rare excursion to HomeGoods, I stumbled upon the perfect shadow box for only $12.99.  It was kismet, as it was the last one left and it was just calling to me.  I had a feeling the perfect housing for Pop’s treasures would be there that day and it was.  Honestly, the shadow box could have been priced at $50 and I still would have purchased it. It was just that perfect.

Last night, I removed the treasures from the box and chose the pins and medals that seemed to best represent Pop and his life-long affiliation with both the American Legion and VFW.  At Pop’s funeral, my husband was also given an oversized, American Legion emblem that was a duplicate of the one displayed on the coffin. So, we added the emblem to the collection of treasures.

First, I laid out the items on the shadow box’s backing to contemplate the layout.  This is the final layout that I found most pleasing and honorable.

The next step was to remove the shadow box backing, as many of the items are pins and would need to be physically adhered to the backing using the pinning mechanisms.

The backing removed from the interior of the shadow box.

Using “Twice As Tacky” glue, I glued and pinned my way to the finished product.  Usually I do these sorts of projects whilst listening to the radio or watching television, but not this one.  I sat in silence as my children slept and my husband tinkered in the basement.  I didn’t even notice the silence, as I was absorbed in my own thoughts about each treasure as I affixed it to the shadow box.  It was a little difficult at times because of the tears that blurred my vision, but they were happy tears.  I was happy that I, my husband, and my children, had the pleasure of knowing Pop and being part of an extended family that cared so much for each other.  I’m sentimental and sometimes it gets the best of me – in a good way.

After affixing all of the items, I securely glued the backing into place and let it dry overnight.

This morning, I was greeted by this.  Somehow it looked different to me this morning.  The labor of my craft is a distant memory, as I was overcome with emotion, pride, and respect for all that Pop contributed to his family and country; simply by seeing the completed shadow box.  I know it sounds silly, but I really did feel that way this morning.  Here is the shadow box. 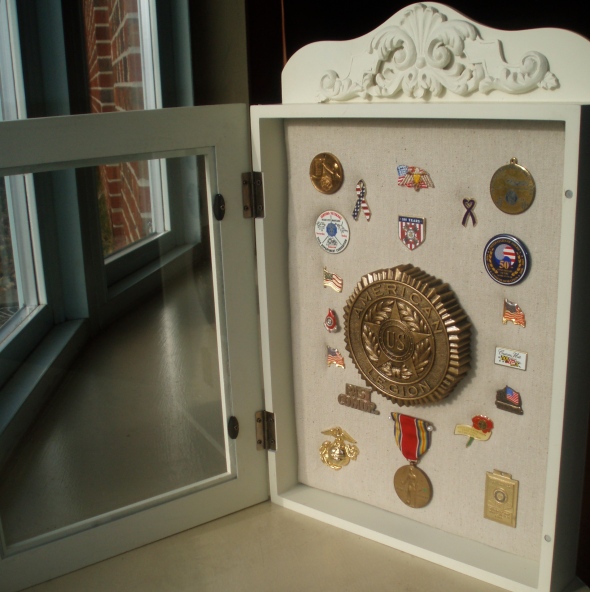 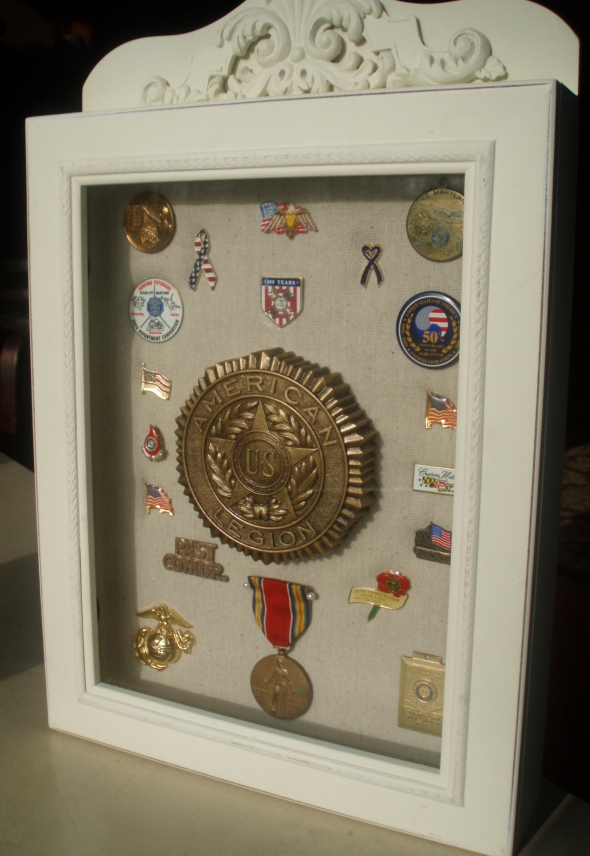 My husband and I plan to present the shadow box to his grandmother as a housewarming present.  I am sure she will welcome it with the spirit of love and respect that created it.  I don’t think my husband’s grandmother, nor anyone else, realized that these treasures were tucked away unceremoniously in a small box in the garage.  The treasures now have a rightful place on display.

On this day of observance of Veterans Day, I thank all of those individuals that have sacrificed, some with their lives, to keep our country safe.  Given our young country’s history of war, it is with the utmost respect that I say:

I salute you and yours.”

Made by You Mondays via Skip to my Lou Blog

6 thoughts on “Honoring Our Veteran”

DIY oh my oh my
exscapes.wordpress.com/