Being the eldest of our children, our son, Roman, has lived in our current home since he was 18 months old.  I did put a bit of thought into Roman’s paint scheme when we moved in, but not as much as I would have liked.  Although, it doesn’t matter much because Roman’s needs and likes have changed a lot in the five years we have lived here.  With the onslaught on ‘Legos’ making their way into our home, Roman needs a room that suits his needs for sleeping, dressing, and playing.  Allow me to walk you through the many stages of Roman’s room to give you a good idea of why his space needs reworking.

This is what Roman’s room looked like before we moved in, during the big clean out:

Roman’s Room when we first moved in.

The first ‘step’ in Roman’s room:

We spray-painted the ceiling fan’s metal housing with a hammered silver. The fan blades were painted in Behr’s ‘Bitter Chocolate’ to resemble a dark, stained finish. The wall vinyl dots were adhered in a compass-like fashion. 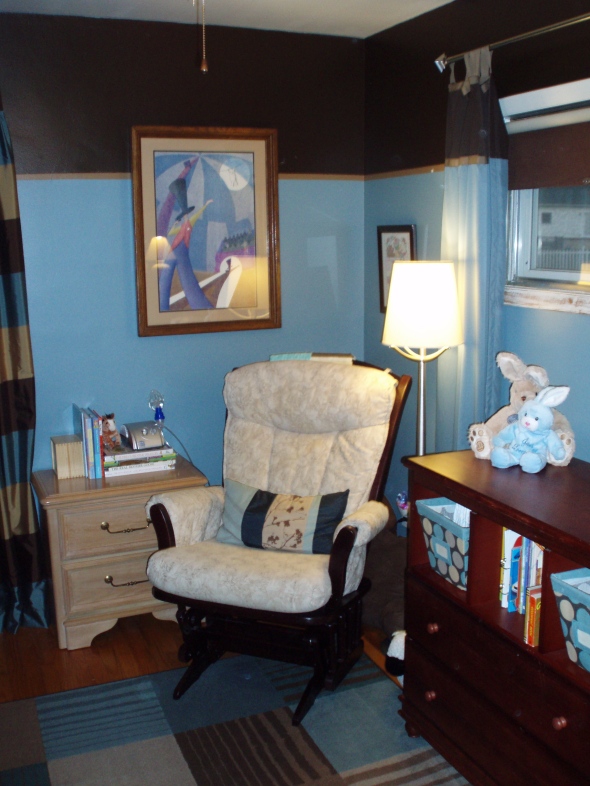 The room’s colors were inspired by the large, original art piece created by my friend, Peter, a children’s book illustrator. The work was commissioned by my in-laws when I was pregnant with Roman. The frame was found by my in-laws and lovingly refinished by my father-in-law. My mother-in-law, using the original art and refinished frame, had it professionally framed. I love this piece and will cherish it always. (Note the ‘I think I want to paint the trim white’ attempt. I chickened out halfway through.)

The paint colors (from top to bottom) are: Behr’s ‘Bitter Chocolate’, Behr’s ‘Pepper Spice’ (thin stripe), and Behr’s ‘Winter Lake’. I found the window panels and roller shades at JC Penney on clearance AFTER I painted the room in only the bottom two colors. After hanging the drapes, I decided to add the dark band of ‘Bitter Chocolate’ to the tops of the walls to mimic the drapes’ color blocking. 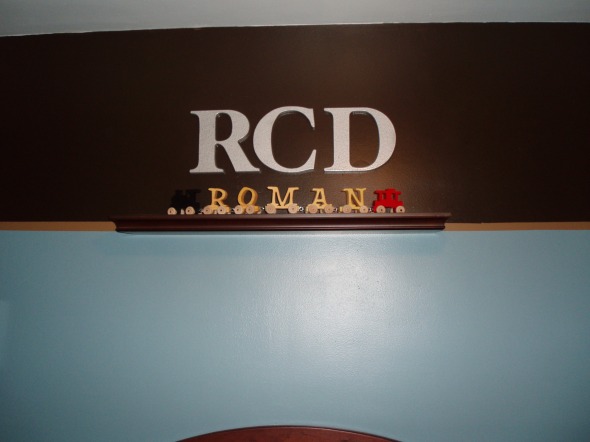 The oversized, wood letters were jazzed up with the same hammered metallic finish as the ceiling fan.

Almost immediately after moving into our new home, our son was ready for a toddler bed. He never tried to climb out of his crib, but he was getting too heavy to lift up and over.

As with the other closets in our home, I elected to remove the access limiting by-pass doors in favor of drapery. These lovely, striped, satin-y drapes were my first choice for Roman’s room, but I soon realized that I need something less formal for the little guy. I love these striped drapes, but even these were eventually replaced by brown, suede drapes.

Since our little one was fast outgrowing the changing table, we utilized it as a bookcase and drawer unit. The 5’x8′ rug was also from JC Penney. 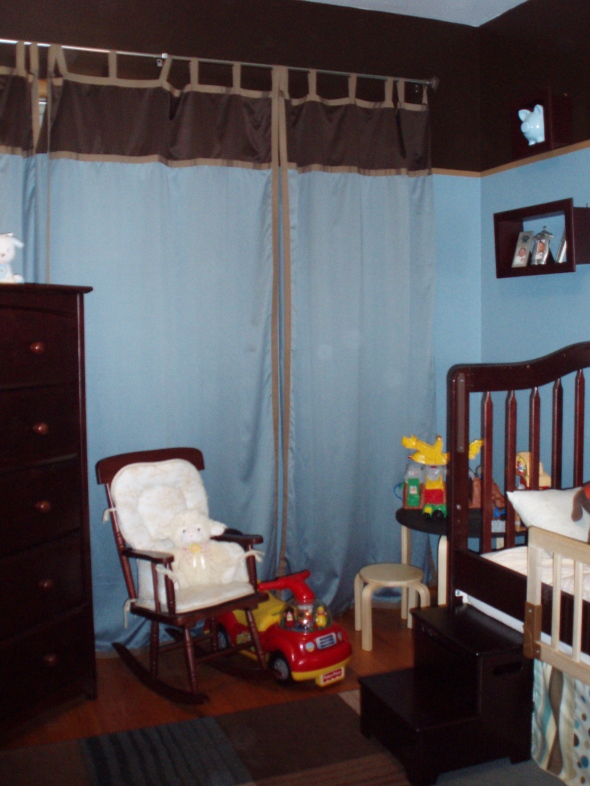 A better view of the drapery/wall alignment. 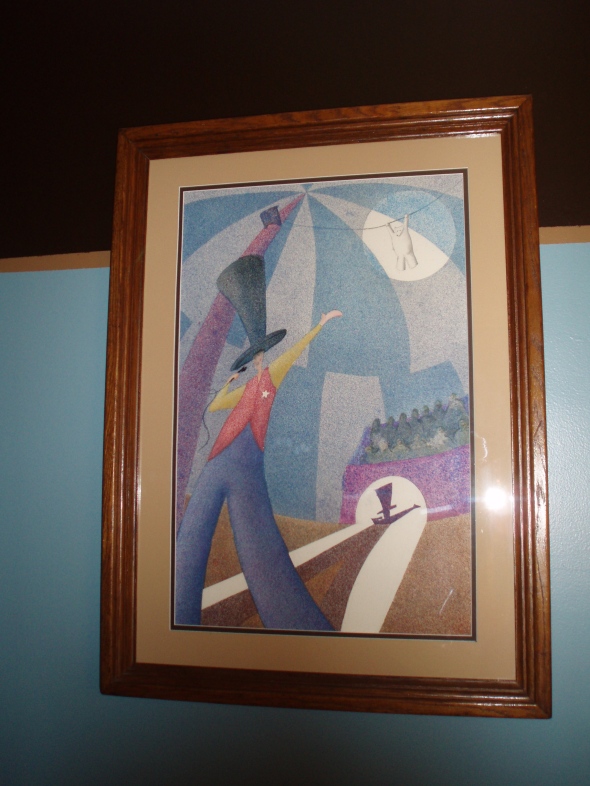 The impressive original artwork of my friend, Peter. The technique is achieved by slightly wetting the paper with a spray bottle and then chipping flakes from a watercolor pencil.  This process is very time consuming. 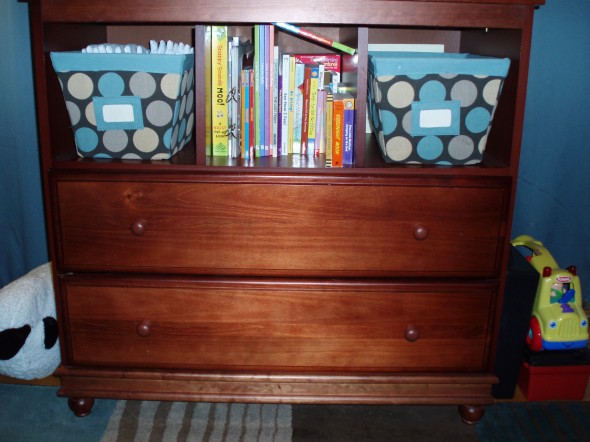 A better view of the changing table being used for other purposes. It really is a great storage piece.

Then, just after Roman’s third birthday, we decided to upgrade him to a twin bed, as I was expecting our little Claire.  I didn’t change much in the room, except the furniture: 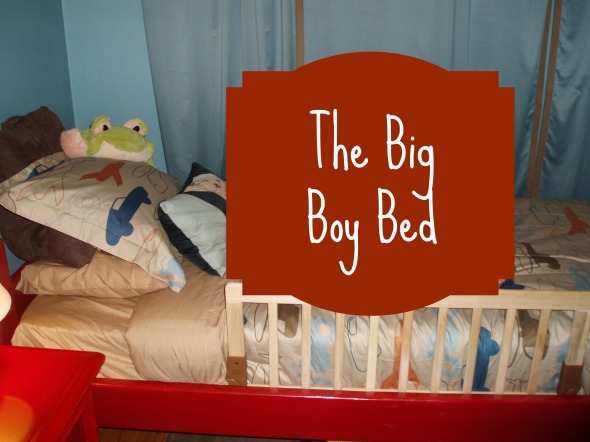 Then, I scored this awesome four piece desk set for $40 from Craigslist and Santa brought Roman a ‘must have’ bunk bed: 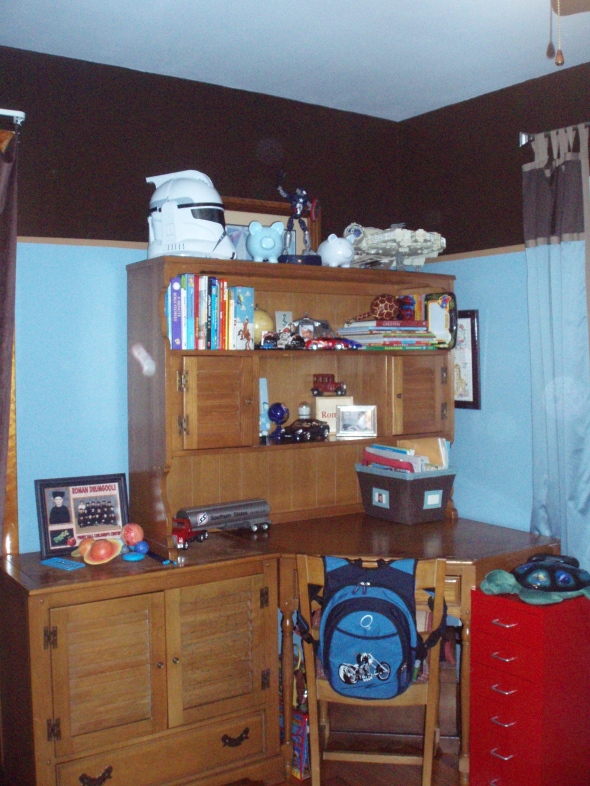 Clearly this is a boy’s room. As much as he tries, it is always messy. This unit does have a lot of wonderful storage, though.

And the bunk bed I found on Craigslist for $50.  It only needed a few bolts and a couple of ladder rungs.  Easy fix. (It was repaired before Santa delivered it to Roman.) 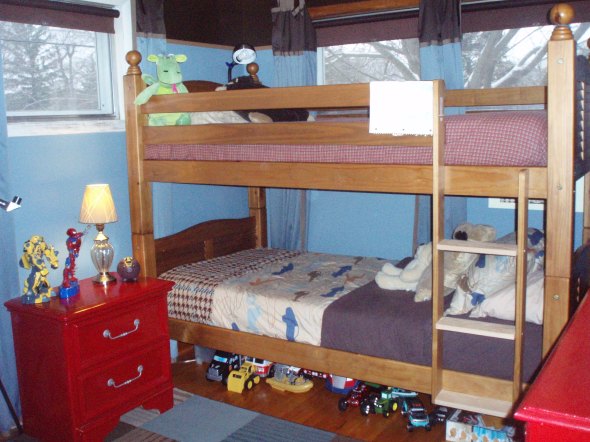 We even managed to squeeze in a cozy, little reading nook in the awkward space created between the foot of the bunk bed and the wall.

Using a tension rod and a sheet, gives Roman some reading quiet.

So, if you have followed me this far, you can see that the biggest problem is storage and organization.  Sure, my son has a lot of stuff (i.e. toys and junk), but he really does treasure some of these things.  Since these photos were taken, Roman has made significant strides in de-cluttering his room.  Also, in our home, there isn’t another place to house toys.  We don’t have a finished basement, playroom, or even a family room/second living room.  Our house is tight and short on storage.  I don’t even have a pantry, nor a linen closet!

The other thing is that Roman is a bit jealous that his sister, Clairisse, and brother, Ascher, have ‘nicer’ rooms than he.  I understand my little guy’s complaints and I want him to feel as special as he thinks his sister and brother are.  That said, the next stage of Roman’s room should last him until at least high school (fingers crossed).

I’ll be sharing my vision of Roman’s frugal and practical room redo in another post.   Until then, happy decorating! 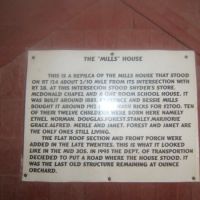 DIY oh my oh my
exscapes.wordpress.com/